When corporate frauds are mentioned, the most famous case that comes to mind is that of Satyam Computer Services. While the high profile Satyam Computers hogged all the limelight, there were several lesser known companies, that did exactly that. Unlike Satyam, they sank like a stone, leaving scores of shareholders poorer.

If one starts to count the public listed companies that have misguided investors, the list will run into four digits. The variety and scale with which it has occurred is beyond the scope of this article. While all companies covered below and in the subsequent parts are not outright frauds (though most of them are), there are cases of misinformation, no information, inability to perform etc. Readers are advised to draw their own conclusions.

Here are a few recent cases where investors have lost their hard earned money and have been left perplexed. The first Jewel in our Hall of Shame is :

This company manufactures and exports personal hygiene products like toothpastes, toothbrushes, petroleum jelly, talcum powder, soaps, shampoos, lotions, ointments, creams and tooth powders. It exports to US, UK, Canada, Italy and France. Oral care contributes about 60% to the company's top line. It had launched a retail chain named The Nature Co. as a one-stop shop for luxurious beauty and holistic wellness products. The company follows June accounting year. Sales, which were Rs.202 crores in 2007, shot up to Rs.684 crores by 2012, up by 238%. Net profits which were Rs.17 crores, shot up to Rs.45 crores, up 165% in 5 years.

First a disclaimer : This company's case looks like that of working capital management gone awry. It is very difficult to draw any direct conclusions as many areas will remain grey in the absence of management clarifications. (Have to write this).

Lets start with the bizarre pattern in pledging of shares

In March 2009, the company filed that the promoters who then held 42.35%, have pledged 61.58% of their holdings. This kept on fluctuating from this low to a high of 99.67%. In the last four years, not a single quarter went by where the pledging did not fluctuate wildly. What is even stranger is the manner in which this was done. Between April 2012 and July 2012, the company filed 12 pledging disclosures to the exchanges, each more stranger and confusing than the one before. Here are a few token examples :

He releases 52,200 shares from Leena Shah (Hey man, you just pledged it to her 3 weeks back!) and pledges 1,31,000 shares to Weikfield Products Corporation, Alpha Beta Chemisalts and Nimit Hemen Shah.

In all of this, about 11 names are common/same to whom the shares were pledged and then released multiple times. These to and fro circular transfer of shares from one entity to another like a ping pong ball went on for almost a year. There is not one bank, financial institution or any other known name in the lenders list. In between, the company tried to raise funds from various sources but was unsuccessful.

With all options closed, was there a last ditch attempt by the promoters to shore up the confidence in order to provide the lenders (who are these people?) a wide exit to dump the shares on gullible investors? On 13th July, 2012, the promoter bought 75,000 shares @ Rs.144 from the open market. That's when this game of musical chairs ended, with the stock falling by 50% within 3 weeks (there is something about this no.3). However it didn't stop there and collapsed by 96%. Here is the stock price graph, which can even put a waterfall to shame. 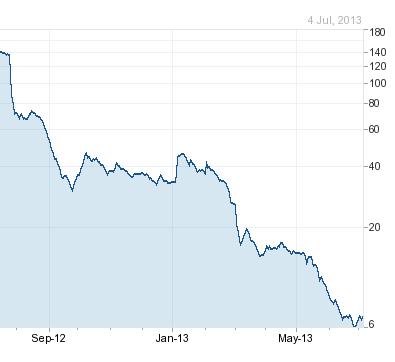 While the stock price was heading down, a spate of resignations followed. Of the six non-promoters directors on the board, four resigned from their post, month by month in a series from January 2013 to April 2013. Its company secretary, who had joined a year back was the first to leave just prior to the annual general meeting. The company has since not inducted any new independent director which is mandatory for public companies to remain listed.


Were there any red flags that could have warned an investor?

Till June 2011, not many. Thereafter, warts began to show up. Here are a few things which should have raised concerns of an alert investor.

► Debt on the books rose by 85% from Rs.198 crores to Rs.365 crores. The company therefore borrowed an additional Rs.167 crores by June 2012 over FY 2011. In June 2011 and June 2012 ended financial year combined, the company reported Rs.108 crores cash profits which was enough to fund the required capex. What was the need for this massive additional funding? According to the company, in 2012, it was borrowing at interest rates of 14-15%, which itself was on the higher side.

► While sales rose by 16% in FY 2012, inventories shot up by 53%. The inventory turnover ratio (shows how many times a
company's inventory is sold and replaced over a period) was at 2.93 (a few more months and most products would have
reached expiry

). For those who don't track the FMCG sector, the similar ratio for Colgate is 17.05.

[For subscribers who are be interested in tracking such ratios and other metrics, a detailed financial report has been
sent to your registered email]

► While the company reported Rs.45 crores net profit in 2012, a reading of the cash flow statement showed a loss of Rs.31 crores
from operations.

Some questions that need answers :

1. Why is it that when the pledged shares are indiscriminately sold, companies start reporting losses?

3. In any case, why did these lenders not sell the shares when the stock crashed by over 96% to recover their dues?

4. Why has no information/explanation been given to shareholders or stock exchanges regarding this unusual fall (down by 96%) in
the stock price?

5. Are the sales of Rs.684 crores real? Can any authority, SEBI, ICAI, Ministry of corporate affairs or anyone confirm the veracity
of the reported financial statements?

Telephonic calls to the company went unanswered. Queries sent to the company through email elicited no response. Though the company might try a comeback, a saying by Benjamin Franklin (said in another context) is apt here :

The next company sinning in the listed space is :

This one is a potboiler. Income tax raids, CBI (Central Bureau of Investigation), Bribes, Arrests, Jail, Bail, Deceit, Lies etc. terms are common in this story.

This one is a group company of the Eldeco Group. This group is into Real Estate and has ongoing projects worth Rs.5000 crores in the NCR region. Our jewel (fake one), that is Eldeco Housing and Industries operates in U.P. with projects mainly in Lucknow and Kanpur with ongoing projects worth more than Rs.3000 crores (source: annual report 2011 and 2012). It is another matter that the company could never report more than Rs.60 crores sales in any of the last 3 years.

On March 28, 2012, the Income Tax department carried out a survey at the premises of the company. The company did not inform the exchanges and did not mention it as part of any document or filing to the BSE, where it is listed. Only the auditors in their report mentioned it. So lets give the benefit of doubt to the company. But what happened later cannot be forgiven.

On June 4, 2012, CBI launched a co-ordinated search operation in Delhi, Ghaziabad, Kanpur, Lucknow and Noida after getting a tip-off that I.T. officials had allegedly entered into a deal with Eldeco to help it in a tax evasion case. The CBI arrested Eldeco's Managing Director Pankaj Bajaj and four other senior I.T officials. The reason - According to the CBI, during the survey conducted on the company on March 28, the income tax department unearthed crores of Rupees of unaccounted money. But before listing the recoveries, the I.T. officials allowed Mr. Bajaj and his family to allegedly take away major portion of cash in lieu of illegal gratification.

On June 22, 2012, even the Chairman of the company S.K.Garg was arrested. Incidentally, at the time of arrest, Mr. Pankaj Bajaj was the president of CREDAI (Confederation of Real Estate Developer's Association of India) and the main objectives of CREDAI are - 'improving the credibility through transparency and fair dealings & implementation of the law of the land.' WOW!!

All this is well documented and the event was covered by nearly every media outfit. Both the arrested company officials are out on bail now. However, shareholders of this company should seek the answers to the following questions:

1. If the unaccounted money belongs to Eldeco Housing (since the search and seizure was conducted at Eldeco's premises), how can
the company and therefore the shareholders get this money back?

2. Why has the company not informed the stock exchange about the arrest of the company's Chairman and its Managing
Director? Is it not a material or important development?

3. Should these directors be allowed to continue on the board, when there is documented proof of their siphoning off funds?

Such situations leave shareholders in a quandary.

Disclaimer : This report is not intended to be taken as financial advice. This report is only for your personal use and not intended for any business purpose. The service does not allow re-posting of content posted in this report and on this site. Siddharth Oberoi or Dess Equity Advisors or prudentequity.com (together referred to as we) have taken due care and caution in compilation of data. However, we do not guarantee the accuracy, adequacy or completeness of any information and are not responsible for any errors or omissions or for the results obtained from the use of such information. We especially state that it we have no financial liability whatsoever to any user/reader on account of the use of information provided in this report.